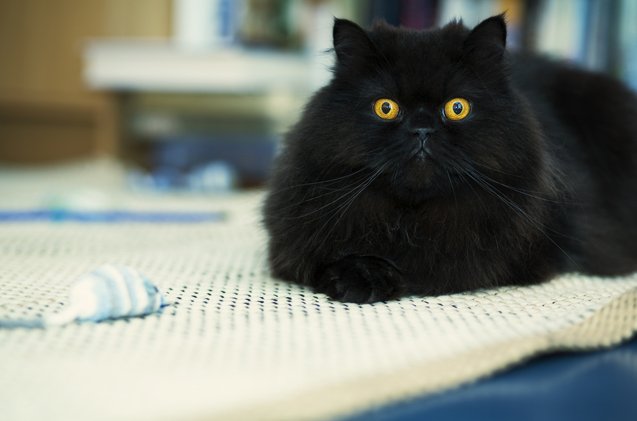 If you’ve ever wanted to have a miniature black panther in your house, look no further than the little black cat who’s up for adoption at your local animal shelter. Not only that you’ll be getting a loyal, loving friend but you’ll also be doing a good deed: black cats have the lowest adoption rates and highest euthanasia rates of all felines, and it’s all because they have an undeserdvedly bad rep. These gorgeous kitties are misunderstood thanks to a lot of false superstition that surrounds them which dates centuries back. Pilgrims have believed that black cats are bad omens and have thought of them to be familiars of witches, and in many parts of Europe, superstition dictates that if a black cat crosses your path, you’ll have bad luck for the day. While these days such things sound silly to most, it definitely did take its toll on the image of black cat- and they still suffer for it.

Of course, outdated superstitions are not the only distinct thing about these pocket-sized panthers. Check out the seven interesting facts about these cats below to learn a bit more about them and why they are so special.

#1 The Bombay Is the Only Black Cat Breed

A lustrous black coat can be found on kitties from a variety of breeds, including pure breeds and mixed breeds, in the world of domesticated cats. However, the Bombay is the only feline breed that solely features a black coat and no other colors (the only accepted coat color for the Bombay is black). That’s because this breed was developed in an effort to make these little cats look like wild black panthers. And, boy, did they succeed! The glossy black coat of this living room panther looks like it belongs to the jungle, and not an apartment building.

#2 The Most Common Eye Color Is Copper

While there are plenty of black kitties with bright green eyes, the most commonly seen eye color in black cats is copper or yellow. And it’s not a simple coincidence- there’s a scientific reason for it! The same reason why black cats have a black coat is what makes their eyes a golden hue: an excessive amount of melanin in their body. This condition is called melanism and it affects the color of the hair and the irises- the darker the coat the lighter the eyes.

The unique traits of black cats go way deeper than the color of their fur! Some researchers believe that the genetics behind a feline’s black coat may also give these kitties additional protection against disease. Studies suggest that genes that are “responsible” for the black color of the coat of these cats are the same that could influence the cat’s immune system and make it more resilient in face of FIV and other similar conditions.

Other experts believe that the black coat is designed to give these cats an advantage when they are hunting, as it gives them extra camouflage so they can sneak up on prey more easily. This one is clear to most people, however- it doesn’t take an expert to see how a black cat would fit in perfectly in the dark when lurking on unsuspecting prey.

All-black pigmentation is a bit more common in male cats than females. Interestingly, the same is true for their lighter counterparts: ginger cats are almost exclusively male, with 80% of these kitties being male. This doesn’t mean, though, that it will be particularly difficult to find a female, so if you’re hoping to adopt a little girl, don’t worry, you’ll find your match. It just might be a bit more waiting and looking before you get lucky: a black female panther is worth waiting for, though.

#5 In Some Parts of the World, They’re Considered Good Luck

Depending upon the culture and part of the world that you’re talking about, black cats might be considered good luck or bad luck (if you believe in that sort of thing to begin with). While the negative stereotypes are prevalent, in some countries, black cats are viewed as signs of prosperity and good health: mostly Great Britain and Japan, as Celtic and Japanese folktales paint a pretty picture of these cats. But the truth is that a black cat is just like any other cat, just with genes that produce a black coat. There’s no need to fear them or consider them lucky, but you can certainly shower these lovable kitties with affection, as they’ll give it right back to you.

Some pet parents notice that their black kitties start to look different because their fur begins to “rust,” or turn into a dark brown hue. According to experts, this could happen if your black cat carries a dominant tabby gene, rather than the recessive version of the gene. Eumelanin is a pigment that’s necessary for a kitty to showcase a black coat, but it’s fragile, particularly in felines with a dominant tabby gene.

So if your black cat tends to nap in the sunshine, the exposure to the sunlight may cause his coat to transform into a brown/red color, or you might even notice the tabby pattern showing through. Also, in rare cases, black cats who start changing color may be dealing with a deficiency in tyrosine, which is an enzyme necessary for the production of eumelanin. How unique is that? Black cats truly are a marvel.

Even though black cats are popular and a lot of people love an all-black kitty, most animal shelters have stated that they find it harder to adopt out black cats of all ages than cats that feature other colors and patterns. In fact, statistics show that, by far, black cats are those that are usually left behind while other kitties get a chance at a happy ending more often.So if you’re thinking about adding a kitty to your family, you may be surprised by just how many of these black beauties are looking for their forever home at your local shelter. Why not be the one to give one of them a chance for a happily ever after of their own?

catsandtoys.com is a participant in the Amazon Services LLC Associates Program, an affiliate advertising program designed to provide a means for sites to earn advertising fees by advertising and linking to Amazon.com.

catsandtoys.com is compensated for referring traffic and business to these companies.